Individual Reenters Community Thanks to Windows to Work 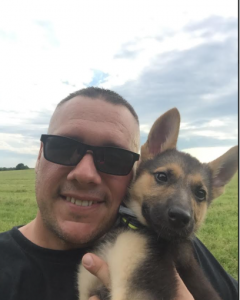 Individual reenters community thanks to Windows to Work.

Thomas was released from incarceration in April 2020 after nine years.

Before his release, he connected with the Windows to Work Program to learn about the services and support available to him, including career assistance. For further services, he co-enrolled in Workforce Innovation and Opportunity Act (WIOA) programming.

When he was released, Thomas moved into his sister’s house and hit the ground running, applying for job after job. He worked with his Windows to Work Coach to prepare for employment, but also on coping with his transition, especially since he was released during a global pandemic.

Thomas initially found work at a factory but his goal was to find a job related to dog grooming because he earned a grooming certificate while incarcerated. Shortly after he obtained employment at a highly sought after dog grooming establishment and began using his new skills to train his own German Shepherd to be a service dog.

Thomas continued advancing on his career journey and is now employed at Tradesmen International as a welder. In the transition, he received a $5.50 raise and is now receiving good benefits.

Skip back to main navigation

MORE IN THIS SECTION

Individual gains skills for great job after incarceration. Raymond attended the Carpentry Techniques Academy to gain new skills that would boost his career opportunities after his release from incarceration. “I took a carpentry class years ago and maintained an interest… Continue Reading Building Essential Career Skills
END_OF_DOCUMENT_TOKEN_TO_BE_REPLACED

Driving Through a Dislocation

WorkSmart helps participant enter new job after layoff. Rocky was referred to the WorkSmart Network through his local Job Center. He had worked as an EMT for many years but left the field for a manufacturing job that provided more… Continue Reading Driving Through a Dislocation
END_OF_DOCUMENT_TOKEN_TO_BE_REPLACED